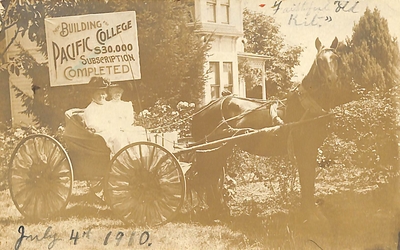 Evangeline Martin and Amanda Woodward with horse "Faithful Kit" in the buggy from which they completed the subscription for Wood-Mar Hall.

Amanda Woodward, and her husband Ezra, moved from Indianapolis to Newberg in 1880 after being encouraged to begin a Friends community. They purchased a farm, and sold it by the end of the decade so that Ezra could become the head of The Newberg Graphic. Amanda and Evangeline Martin raised $30,000 to fund the construction of Wood-Mar auditorium in 1910. The Woodwards, especially Ezra, were particularly keen on supporting the progressive need for new campus buildings. The couple lived in what is known today as Woodward House, or the Health and Counseling Center at George Fox University, for many years.

Evangeline Martin was a long time supporter of Pacific Academy and Pacific College. As a school teacher and a Quaker she was passionate about education and supporting the educational efforts of the Friends Church. Evangeline Martin was a member of the College Board from 1891 until her death in 1928. She served as sectretary of the Board from 1904-1926. Evangeline Martin is best known for two major accomplishments. First, she was the Sunday School teacher for Herbert Hoover during his time in Newberg. Her teaching had a major influence on young "Bertie" Hoover who returned to visit her in Newberg throughout his life. Second, when she saw the need for major growth at Pacific College to keep the school alive, Martin joined forces with Amanda Woodward to raid $30,000 to build a new building for the campus that would solidify it as an institution. The pair went door to door in a buggy pulled by their faithful horse Kit and slowly raised a subscription to support the building project. Wood-Mar Hall, named for these two ladies, still stands in their honor.