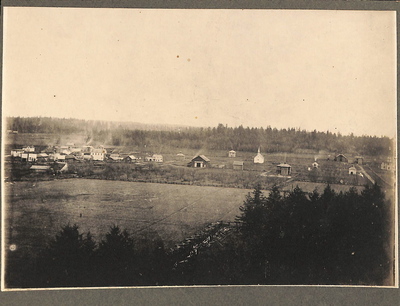 This photo was taken by Clint Smith from a lot back of Mrs. Deskins' fields with the camera pointed in a south-eastern direction. The house at the extreme left was the home of Dr. Henry John Minthorn, principal of the academy. Herbert Hoover was living here with his uncle at this time. The home beyond Dr. Minthorn's was Mrs. Hadley's. She and her son Eli and daughter Ella occupied it at that time. The store building this side of the Doctor's home was occupied by Norris, Miles and Co. as a general store. Just across the street to the west was the general of John Smith. In the foreground is a part of the farm of Mrs. Sarah Deskins. Mrs, Deskins' maiden name was Shuck and as a girl she had accompanied her parents accross the plains by ox team. Her home was an old home at the time Newberg was started. Her orchard which is seen in this picture helped to supply apples and pears for the community until other orchards grew to bearing age. The long woodshed at the east of her home was built especially to make room for the stove and fireplace wood which her father, Old Grandpa Shuck, about ninety year old, kept busy cutting in the great grove of second growth fir and scrub oak, a part of which is seen in the lower right corner of the picture. The two story building was built by Dr, J.B.. and Charles Moore in 1886-1887. Dr. Moore had his office in the building and his brother Charles had a drug store on the lower floor. The second floor was used by Samuel Hobson as a photograph gallery and a hall used for general meetings, oyster suppers, etc., and it was also used as a Good Templars Hall. Just at the right of this building a low, one story home can be seen. This was occupied by Mr. and Mrs. Jim Henry who owned the Livery Barn shown in the center of the picture. At the right of the drug store a one story building with the gable toward the camera was used as the first office of the Newberg Graphic, a small weekly paper printed on a Washington Press. The two story house with a striped roof was owned by a young woman who lived in Dayton. We lived in it when we moved from Tillamook to Newberg September 1886-August 1887. To the right of the Livery Barn is a two story house owned and occupied by Ben and Vira Cook. Mr. Cook was general agent for the Home Fire Insurance Company of Salem, Oregon. He was the man who was instrumental in getting us to rent our farm in Tillamook and move to Newberg so that we children could have the advantage of a good school. He secured father as an agent for the insurance company. The eight sided building in the left of the liver barn was a barn built by Dr. Moore. Doctors in those days had a good team of horses and strong buggies so that country calls could be made quickly in summer of winter. Int he background is a hoe occupied by Edwin and Luisa Trueblood and family. Just to the right of the home of Ben Cook was the home of the Washburns surrounded by an orchard. The barn is at the right of the house. The white patch on the ground at right of the barn is water in the depression at the side of the street. No streets were paved at the time in Newberg. The large house and barn beyond our barn at the end of the street was the home of Jesse and Mary Edwards and family. Barely showing at the right side of the pictures in the Friends Pacific Academy, a three room building. About a mile south was the Willamette River. Note that between the town and the river was a heavy growth of large fir trees and also much second growth fir, oak, and cedar. Many of the young men in the Academy worked during their spare time cutting cord wood from the second growth trees for which they received $1.00 a cord to cut and pile it. [More information on the back of the original.]