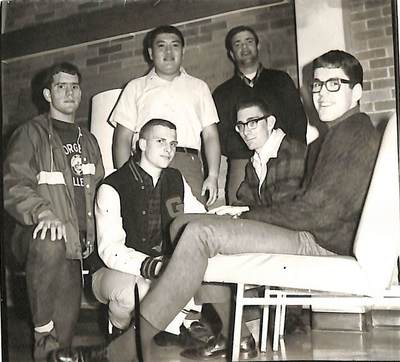 Dwight Kimberly is featured here in his letterman's jacket.

In the quarter of a century he taught classes at George Fox, Dwight Kimberly earned the respect and admiration of both his peers and his students. Many remember him as the 2000 Oregon Professor of the Year, but winning honors was never Kimberly’s agenda. Rather, the biology professor took pride in investing in his pupils. It wasn’t uncommon for him to spend late hours helping students in lab or engage in conversations with them outside the classroom. To him, every student was a puzzle in need of a solution, prompting him to ask, “How can I unlock that puzzle and get the most out of you?” He also saw study as a form of worship: “It’s a spiritual matter. It’s part of the quest of finding out what God will have you do with your life.” Kimberly’s love of students and learning resulted in a teaching career that began at Oregon State University in the mid-1970s, included 18 years at Warner Pacific College, and culminated with his 25-year commitment (17 full time) to George Fox.