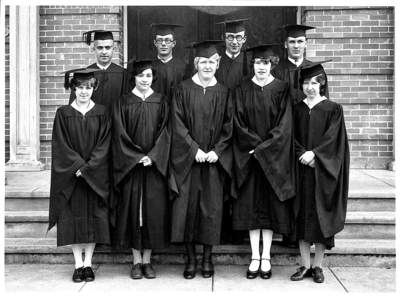 At the top right in his graduation gown, Marion Winslow graduated from Pacific College in 1927, where he was involved in the theater department at the college. He won an athletic award for lettering in both football and basketball during his time at Pacific College. Awarded alumnus of the year in 1975. For 17 years he served as the superintendent of schools in Grant's Pass. He moved in 1951 and became the superintendent in Coos bay for another 17 years. After his retirement he worked with the Retired Educators Legislative Committee to fight for benefits for retired teachers. He was involved in the passage of legislation for school funds ever since 1943. Even after his retirement he continued to serve the school district as an acting superintendent in Damascus, Oregon, and acted as an arbitrator for people's grievances for local school districts. He was an active member of the Presbyterian Church where throughout his life he served as an elder and Sunday school teacher.