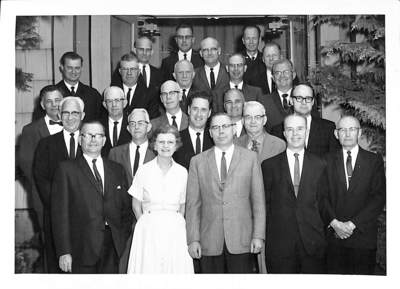 Here on the left, second row from the bottom is Dr. John Brougher. Brougher and his wife Esther were strong supporters of George Fox. Dr. John Brougher had a thriving obstetrical practice in Vancouver, Washington where he is believed to have delivered more than 10,000 babies. While Brougher never attended or worked at George Fox, he was dedicated to the success of the college. He was a very generous donor of funds for the college, setting up several scholarship funds for students. Brougher Hall, originally built as a science building, was named in honor of the Broughers. Dr. Brougher served on the George Fox Board of Trustees from 1946-1976. In 1973 he was awarded an honorary doctorate of letters for his service to the college. In 1977 he donated his collection of antique medical equipment and George Fox Memorabilia to the college to support the campus museum, which was renamed in his honor. He served as volunteer curator of the museum from 1977 until his death in 1983. God was always first in the life of John and Esther Brougher, and because of this they were devoted to living simply and giving generously.