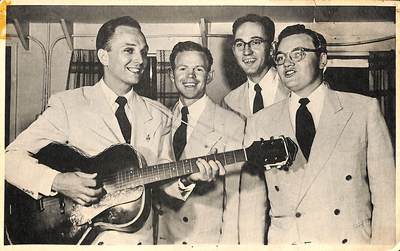 Ron Crecelius (far left) graduated from George Fox in 1948. He was a member of the Four Flats Quartet. In 1955 he received a masters degree from Western Evangelical Seminary. He was later granted an honorary doctor of divinity degree from Western Evangelical Seminary. He was the chaplain at George Fox College for 14 years, retiring in 1985. He was chosen as one of the graduation speakers for the 1985 graduation ceremony. Before his time at Fox, Crecelius pastored churches in Oregon, Washington, and California. He was pastor and director of admissions at Brown Military Academy in California.