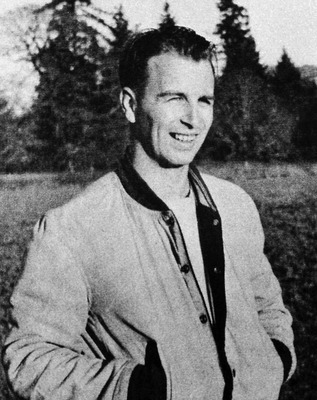 George Bales, alum from the class of 1943 was born to Jasper and Ethel Bales on January 5, 1924. He attended Newberg Friends from the time he was born until after he married Elenita Mardock on June 6, 1944. They transferred from Newberg Friends to Highland Avenue Friends in 1946 and then again to Eugene Preparative Meeting in 1954. George and Elenita Bales followed Milo Ross as pastor of Talent Friends Church in the late 1940's and early 1950's. He was the pastor of Rose Valley Friends when it was started in 1960. George Bales (1948-54) was known for his outstanding relationships with students and was a builder of athletic pride at George Fox. In 1948, he became athletic director and head coach of the football and basketball teams. His ﬁrst year, he guided the football team to a 4-2-1 record, its best in years. After two runner-up ﬁnishes, his 1951-52 basketball squad won the Metropolitan Conference title. In 1948, he helped establish a physical education minor.