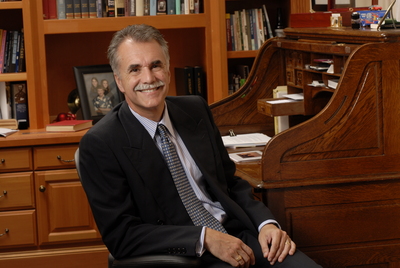 Robin Baker was born to parents Doug and Patsy Baker in Phoenix, AZ, where he spent most of his youth. He graduated from Grand Canyon University in 1980 with honors in history and political science. His love of history led him to puruse a masters in history from Hardin-Simmons University and a doctorate in history from Texas A&M. He excelled in academics at all of these institutions, getting high honors. In 1999 Robin Baker came to George Fox University as the Provost. During his eight years as provost he oversaw the addition of 13 new undergraduate and 9 graduate programs. He is passionate about the globalization of education and helped institute the Act Six scholarship at George Fox. In addition to his work as provost Robin Baker has taught classes in history at the University. His research primarily focuses on American Civil War and Reconstruction, 19th-century American political/ quantitative history, and the history of the southern United States. He also takes a great interest in the works of C.S. Lewis and J.R.R. Tolkien. Robin Baker was sworn in as the twelfth President of George Fox University on March 6, 2008.