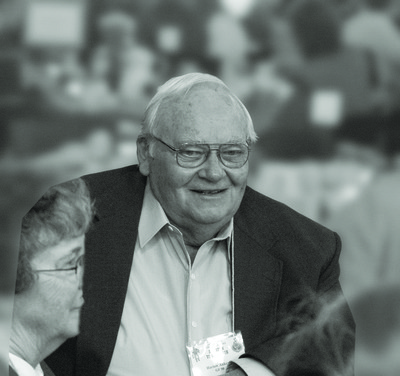 Harlow Ankeny is a 1950 alumna of George Fox College. Ankeny is a gifted vocalist and was a member of the award winning Four Flats Quartet, as well as the voice of the "Quaker Hour" radio program. Ankeny served as the Public Relations Officer of George Fox for several years. He was a member of Newberg Friends for one year before moving to Azusa, California to pursue ministry. In 1962 Ankeny transitioned from his role at Azusa Friends Church and began working as publisher for Barclay Press, which was part of the Publications Board of the Oregon Yearly Meeting. He and his wife Gertrude returned to Oregon as members of Newberg Friends Church, where they remained until 1982 when they moved to Netarts Friends Church. His ministry spanned nearly 47 years and he was greatly involved with Twin Rocks Friends Camp, where he and his wife Gertrude served for 14 1/2 years, retiring from his job as Executive Director in 1994.