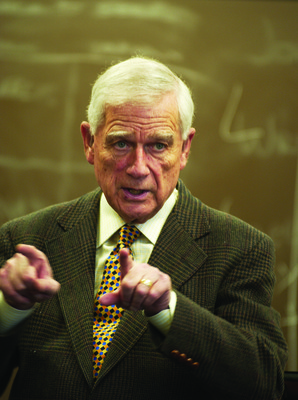 Former U.S. Senator Mark O. Hatfield died leaving behind a vast legacy of service to his country, state and at George Fox University. Hatfield spent a half century in political life, serving as an Oregon legislator, secretary of state, two-term governor and five-term U.S. senator. Upon his retirement from the Senate in the mid-1990s, he embarked on a career as an educator, joining the George Fox faculty in early 1997 to teach courses that focused on American history since World War II, the Vietnam War, the American legislative process, Christians in politics, public policy, and political courage and activism. Hatfield's teaching tenure at George Fox spanned 10 years. In addition to teaching at George Fox, Hatfield supported the school as a trustee from 1961 until 1988, at which time he became an honorary trustee. He also spoke at numerous campus events, including the dedication of the Herbert Hoover Academic Building in 1977 and the dedication of the renovation of the same building in 2006. He also donated more than 100 books and memorabilia about Hoover – with whom he formed a close relationship during his years as a student at Stanford – to the university for inclusion in what is now the Hoover-Hatfield Library. In terms of his legacy, Hatfield was a man committed to peace. Many will remember him as the man who broke ranks with his fellow Republicans for his early opposition to the Vietnam and Gulf Wars – and for his role in coauthoring the legislation that brought the troops home from Vietnam. He also believed that access to education, health care, housing and job opportunities – not just military might – were integral to achieving national security. At George Fox, Hatfield's dedication to peace came to light in his address at the installation of then-president Edward Stevens in 1984. In 1985, the school opened its Center for Peace Learning (now the Center for Peace and Justice) in response to the challenge Hatfield had made in his address the year before.