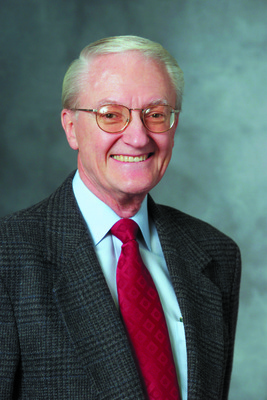 On March 4, 1955 Samuel Farmer married Dorothy Rosalie Gimbel. He then graduated from George Fox in 1956. Sam is a member of the President's Council along with his wife Dorothy. Same Farmer served many roles at the institution including position as a Vice-President for development and Vice-President of special projects. Farmer was a member of the Board of Trustees for 19 years. He volunteered as assistant to the president for special projects. In addition to working on campus projects, Farmer represented the university on the Chehalem Valley Chamber of Commerce board and as a member of the Newberg Kiwanis Club, for which he has done periodic upkeep of newspaper recycling bins. His community involvements also include the Citizens Police Academy, Community Clean Sweep, and the Mayor’s Prayer Breakfast. Famer also serves on the Archives Committee where he advises on the archives efforts to preserve university history.