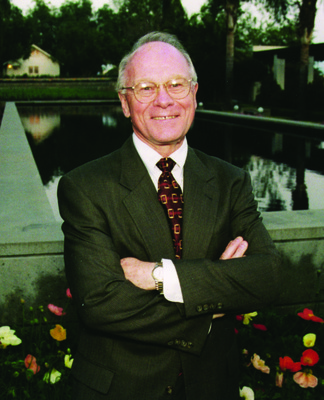 David Brandt was the 11th president of George Fox University, assuming the position August 1, 1998. Brandt was born September 18, 1938 in Manitoba, Canada. As a youth he wanted to become a high school physics teacher, and went on to study physics in his undergrad education. After gaining his bachelor's degree he continued to pursue education, going on to get a PhD in physics from the University of Oklahoma. In addition to his work in physics he gained a lot of experience in college administration. David Brandt and his wife Melva were living in Kansas when he was first offered the Presidency at George Fox and he initially refused because he liked where he worked. Ultimately they felt that God was leading them to Fox where he took over from Edward Stevens. One of his goals was for George Fox to promote diversity and work through differences of culture and background among the people at the university. In 2015, a new dormitory, Brandt Hall, was named in his honor. President Brant was on hand to dedicate the building and help students move in.