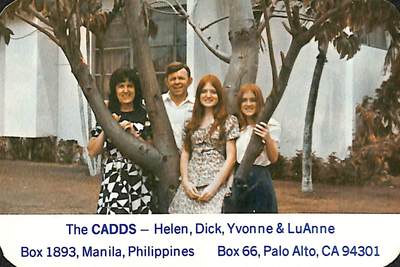 Dick Cadd is a 1949 alumnae of George Fox (then Pacific College). During his time as a student he served as the student body vice-president and was a member of the Four Flats Quartet. He became engaged to Helen Antrim, also from the class of 1949, during his sophomore year in college, as they were both active in the music department. Dick and Helen later served as missionaries in the Philippines and many of their children and grandchildren also attended George Fox. The Cadd's were awarded Outstanding Alumni of the year in 1999. Their whole family was involved in music and missions, which they continued to share with George Fox throughout the years in the form of family concerts.