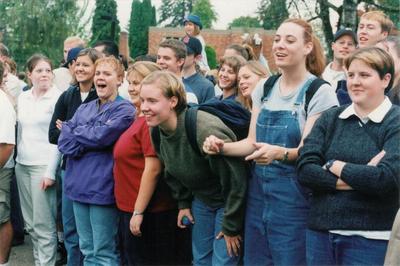 Over a century ago, a mother bear was killed in the Coastal Range, and her cub was discovered and adopted by members of Pacific Friends Academy (the forerunner of the university, founded in 1891).

The bear-cub was nurtured by community members until its death. Hence, the “Bruin” was chosen as the mascot for the institution, and its poignant effigy, “Bruin Junior,” is a highly sought-after leather stuffed animal, whose custody is vied for—sometimes in ways endangering a pacifist heritage—among the undergraduate students.

Students willingly fight over its custody in "Bruin Brawls" for pride of place among the undergraduate classes.