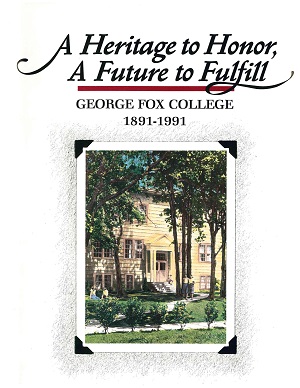 CHAPTER TW0-1911 to 1926 Levi Pennington guides the Academy and College through difficult years that lead to recognition by the U. S. Bureau of Educational Standards.

CHAPTER THREE-1926 to 1941 Sacrifices by a heroic faculty help the College survive a severe economic depression. The board decides, in 1929, to close the Academy.

CHAPTER FOUR-1941 to 1954 Theological controversy takes a heavy toll as the College seeks its identity. The trustees change the name to George Fox College in 1949.

CHAPTER FIVE-1954 to 1969 The College and its founding church unify. Milo Ross leads the school to full accreditation in 1959.

Produced by George Fox College in celebration of its first one hundred years.