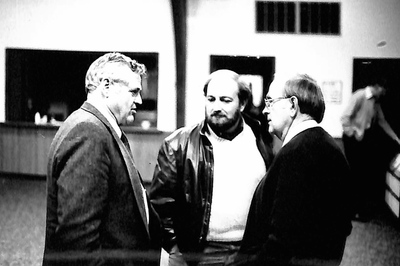 Richard Beebe is on the left of this photo.

Richard Beebe, class of 1951 was a long time member of the Northwest Yearly Meeting of Friends and supporter of George Fox. Beebe served as presiding clerk of the Northwest Yearly Meeting for 16 years. He was on the George Fox Board of Trustees from 1974-1989. In 1985 he was named alumnus of the year. In 1991, the Beebe residence hall was built in his honor. At the time of his death in 2003, he was serving as chairman for the George Fox committee for student life and religious affairs.