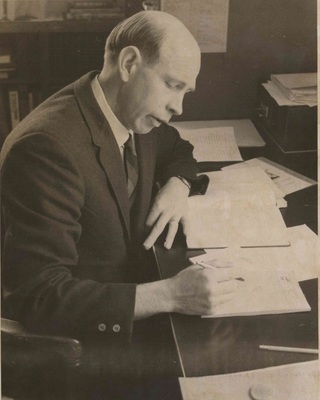 Arthur O. Roberts (1922-2016) was a prolific Quaker writer who spent many years on the faculty of George Fox College (now George Fox University) after receiving his doctorate from Boston University in 1953. While at the college he was instrumental in researching Quaker historical themes and developing the George Fox College Peace Center. Some of his writings include Tomorrow Is Growing Old: Stories of the Quakers in Alaska; Through Flaming Sword: The Life and Legacy of George Fox; and Children of the Light: A Christian Musical, based on the journal of George Fox. During his many years of professorship at George Fox, Dr. Roberts also participated in the Quaker Theological Discussion Group, Quakers Uniting in Publications (QUIP), Friends World Council for Consultation (FWCC), and the American Friends Service Committee. He contributed significantly to several publications about Quaker concerns. His relationship with the Northwest Yearly Meeting of Friends was deep, particularly with the formation of such programs as the Chicano Ministries (Mexican-American ministries) and Elder Hostel at Tilikum, a retreat center affiliated with the university. He also is credited with renaming Pacific College, George Fox College, when a letter he wrote persuaded the Board to select George Fox as the new name in 1949. Recently the Roberts Center, which houses the Physical Therapy, Psychology, and Nursing departments was renamed in honor of Arthur Roberts and his wife Fern.