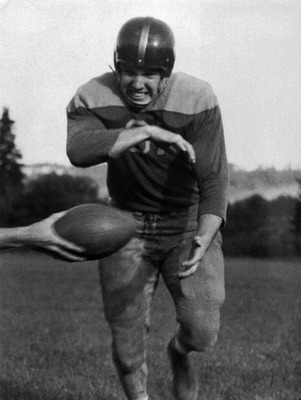 An early pastor of Agnew (Washington) Friends outpost, Harold Ankeny graduated from George Fox College in 1950. After pastoring Agnew friends Church, Timber Friends Church, and an interdenominational church in Sierra Madre, California, he worked for the California Yearly meeting. His commitment to George Fox College was unparalleled and appreciated by many In 1968 he returned to George Fox College as the dean of students. He spent the next six years in that position, taking on the role of director of financial aid in the last two years he spent as dean. Ankeny began work as the full time director of financial aid in 1974, and spent the next seven years in that position. He moved into the office of Development in 1981 where he served as director of annual funds. In addition to his official roles at the College he also served as the unofficial pastor to the president. Ankeny retired in 1981 after many years of faithful service to the College. Even after his retirement he continued to served as the Oregon Chairman of a campaign among college alumni. Ankeny passed away December 17, 2014.