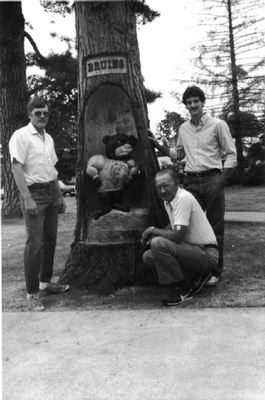 Clyde Thomas is the current director of Plant Services at George Fox Univeristy. He grew up in Quincy, Washington but moved to Newberg in 1974, when he enrolled at George Fox College, grduating in 1978. Although he did not attend the College until the 70's, Thomas' connections with the University extend as far back as 1909 when his maternal grandfather Oliver Wheeler taught at Pacific College. During his time at George Fox he worked as a groundskeeper. In 1983 he was hired as the Grounds Superintendent and finally as the Director of Plant Services in 1990. Despite his role as director he remains very closely tied with the rest of the workers at Plant Services, frequently getting out of his office to join them and work on projects around campus. It is because of his strong Christian faith that he has chosen to stay at George Fox and minister to those on campus.